Yesterday, I heard the news that the former Chief Minister of West Bengal, Sri Jyoti Basu passed away. Commentators found some of his policies controversial, but no one could deny that he was one of the most charismatic Indian politicians of the last century. On a personal note, for most of my life, he was also the only Chief Minister I knew.  So  it was only natural that yesterday, I was thinking about his long political career and the futile stand he took against the leadership of his party in 1996. It was a brave move and as one friend put it, he will be remembered perhaps, as “the best Prime Minister that we never had.”

People from all walks of life from Bollywood film-star Amitabh Bachchan to Prime Minister of Bangladesh Sheikh Hasina paid their respects to the fallen stalwart. The news made a lot of headlines in all the Kolkata-based newspapers too.

However, in their emotional state, some people might have gone a bit over the top. Anandabazar reports some comments of the common people in the newspaper today. 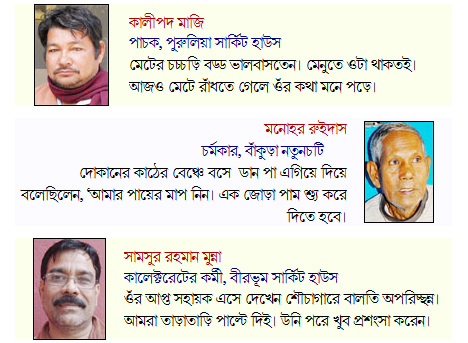 The following comment from a worker at the Birbhum Circuit-House was a bit surprising:

(“The bucket in the bathroom was dirty. We changed it quickly. Later, he [Chief Minister, Jyoti Basu] was full of praise for us“).

My honest question is this: if you had one chance to give an account of your last respect to one of the stalwarts of your state to the largest-circulated daily newspaper, would you freely say there was a dirty bucket in the bathroom under your charge?

1. If you are suffering from logorrhea what is your ailment?

2. What Hindi (or Sanskrit) word does Mandarin, the official form of Chinese language with the most speakers in the world, originate from?

3. What was the first clinical use of cocaine?

5. Every American President with a beard while in office has belonged to this political party. Which party am I talking about?

1. You are excessively talkative and might often talk nonsense. We seem to know many people who suffer from logorrhea and hope the medical community finds a drug to cure this disease!

2. Surprisingly, the root word for Mandarin might actually be mantri.

4. The Indian spacefarer who is the equivalent of an astronaut or cosmonaut. Reminds me of Captain Vyom!

These are two melodramatic scenes from two hit Bengali/Bangla films. The first one is from Chhoto Bou and the second is from Mangaldeep. Apart from the common actors, you’ll notice a common formula.

© 2010 Bhalomanush. All content is copyright and may not be used without permission.